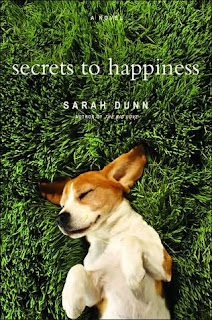 Holly Frick just went through the worst kind of divorce: the kind where you’re still in love with the person divorcing you. Alex had left her on January 3rd, like a benevolent CEO who holds off the pink slips until after the holidays. Holly is left to wonder if she’ll everfind happiness again. Like Jane Austen’s Emma Woodhouse, Holly is intimately involved in the lives of those around her, and she’s compelled to give advice with unwavering moral certainty. And, like Emma, she is often completely off the mark. Soon, her advice will get her in over her head, and she’ll find herself playing therapist to her ex-boyfriend’s new girlfriend while at the same time falling for her married friend’s lover. Smart and touching, SECRETS TO HAPPINESS is a hilarious look at the funny things people do to be happy.

I heard about this book on the today show, it was touted as one of the must reads of the summer. So I was looking forward to reading it and was lucky enough to get a copy of it from Hachette Book group. And the cover is just really cute. Unfortunately that is where the pleasantness ends on Secrets to happiness. The book was hard for me to get through if I am completely honest. I almost stopped reading but by that point I was half way through and so decided not to give up.

I am not sure how the book can be put into the chic lit genre as over all it is rather depressing. I can understand that it is a gritty look at Manhattan love. But when I read chic lit I expect it to be well more like a romantic comedy. Perhaps that’s just me. The plot itself is boring; the characters are just flat on the page and not that likeable.

The most likeable thing about the book? The dogs. They are the saving grace over all. I could leave the rest of the book and not feel like I have missed anything. There truly are no secrets to be revealed in the Secrets to Happiness. This hit’s the skip it shelf on my list of books. And if you do feel like plugging through I wish you luck.