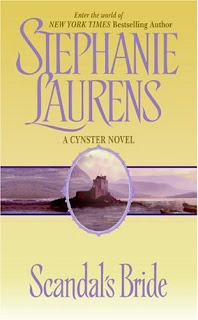 When Catriona Hennessey’s uncle’s cleverly crafted will offers her the choice of either marrying the scandalous Richard Cynster or leaving her innocent cousins penniless, Catriona is appalled. If she marries at all, she wants a consort who would allow her to continue to act as healer and serve “The Lady,” as the women in her family have always done. She knows Cynster is far too overbearing to be that person. The Lady, however, has other ideas. Laurens takes full advantage of the current New Age interest in ancient Goddess worship to weave a steamy story with strong, well-matched protagonists, lively action, and love scenes that melt the pages. Although the novel is set during the British Regency, the period has little influence on this patricular story; readers who want a bit more Regency flavor might enjoy earlier books in the Cynster series.

Scandal’s Bride is the third installment of the Cynster series by Stephanie Laurens, and by no means are these strong, handsome virile men getting tiring. On the contrary this new story brings us into the light of the Cynster we met on the very last pages of the Second book A Rake’s Vow, Scandal like Vane before him said he would not bow to fate, he would escape her he would not marry.

Well, as we have learned by now that’s what they all say. Devil the most Alpha of the Cynster’s fell first, and than Vane, and now its Scandals turn, so named because he was the Scandal that never was. Handsome black haired blue eyed Richard Cynster is officially an illegitimate second son of Sylvester Cynster Duke of St. Ives (may he rest in peace) and Devil’s younger brother. But when Richards Scottish mother died, he was sent to live with the Cynster’s, the than Duchess now Dowager Duchess Helena scooped him up and proclaimed him her son. No one, not the ton not anyone dared say anything to dispute it. And so there was Scandal.

Now the man his mother was married to has passed away and it is finally time to claim the necklace that was left to him by his Mother. But the will holds a surprise, Richard is supposed to marry the hoity, hot headed, stubborn, Miss Catronia Hennessey or Seamus deems his estate will not pass to his family but onto the church.

This book really has to be my favorite of the Cynster’s thus far, the premise and the assumption that Richard will simply turn his back on everyone is fantastic. He of course is a Cynster to have and to hold, and they cherish family. And he knew from the moment he kissed Miss Catronia in the graveyard before knowing who she was, he would have her. She of course resists, but he is a Cynster. And her Lady has decreed he will be the father of your children.

This book delves into their personal relationship, growing to trust one another and love one another. And not only that but to admit that love. Who can’t take a look at their own life through those glasses? They learn that there is more to them than just their very hot physical selves. There are of course a few turns and twists thrown in for good measure but this book truly does focus on them. And when the Cynster family descends we get to see Devil and Honoria and Vane and Patience once again, which to me is always pleasant when you check in with characters you grew to love in a previous book. So if you ask me Stephanie Laurens has done it again, read it and love it!