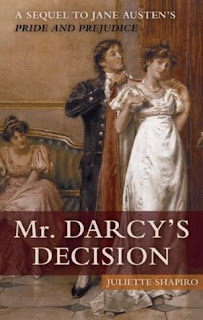 Newlyweds Mr. and Mrs. Fitzwilliam Darcy begin their married life at Pemberley quite blissfully, but it is not long before the tranquility they seek is undermined by social enemies. The formidable Lady Catherine de Bourgh makes little attempt to hide disdain for her nephew’s wife. She is joined by Caroline Bingley, as sharp tongued and resentful as ever, in the shared amusement of criticizing Elizabeth. However, the new mistress of Pemberley has more pressing matters on her mind — the fact that she is carrying the Darcy heir being the most pleasant of them. But concern mounts with the sudden return of Elizabeth’s sister, Lydia. Alarming reports of seduction, blackmail and attempts to keep secret the news of another’s confinement dampen even Elizabeth’s notoriously high spirits. Darcy, soon faced with the most difficult decision of his life, will have to reveal his true character: Has his love for Elizabeth softened him or is his former aloofness about to be resurrected?

Just like many women worldwide I love the story of Pride and Prejudice. I love Elizabeth Bennett and of course the Mr. Darcy. So while I know the original can never be compared to I thought it would be fun to read some of the stories coming out that are a continued version of the story. Mr. Darcy’s decision came up as the first in the pile.

While I will be the first to say that this book does not have the same substance and structure as pride and prejudice, it is still an enjoyable read. Juliette Shapiro does a good job of keeping the characters as true to their original colors as possible. You have waves of angst and over all a good telling of the story.

I fear I can not go into to many details as the plot is fairly well interwoven and I don’t want to give any of it away. If you like Pride and Prejudice I do think you will like Mr. Darcy’s decision. But you will need to always keep at the front of your mind the reminder that it is not Jane Austen.