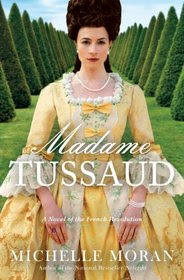 From Versailles to Boulevard du Temple, royalists to revolutionaries, art to science, Moran (Cleopatra’s Daughter) returns with a new historical novel of fierce polarities. Set during the French Revolution, with an emphasis on the Reign of Terror, Moran’s fourth deftly chronicles the consequences of seeking reversals in power-or liberty. Marie Grosholtz, the talented wax sculptress who would become Madame Tussaud, narrates with verve. She and her family are “survivalists” who “straddle both worlds until it’s clear which side will be the victor…” but never come across as opportunists; they are resourceful, sympathetic individuals facing an unraveling nation and an increasingly angry mob mentality. Though readers may wince at the inevitable beheadings, the storming of the Bastille, and the actions of men like Robespierre, Moran tempers brutality with Marie’s romance and passion for artistry; quiet moments in the family’s atelier provide much needed respite. This is an unusually moving portrayal of families in distress, both common and noble. Marie Antoinette in particular becomes a surprisingly dimensional figure rather than the fashionplate, spendthrift caricature depicted in the pamphlets of her times. A feat for Francophiles and adventurers alike.

When we visit places that started as historical places we often forget that they started as such. I think that is the case of Madame Tussauds in modern day history, it is so easy to forget she was a real person. Michelle Moran’s novel reminds us that she was indeed and not only was she a real person but that she formed herself in the most turbulent time in French history. Michelle Moran’s novel of Madam Tussaud is a master piece and a thrilling read. We meet so many characters that are known and loved it almost takes your breath away. The characters are so well written they seem to leap off the page.

I would recommend this book to an array of people. If you like history in general read it, if you like French history read it, Marie Antoinette? Read it. Must I really say more on who it will appeal too? This book truly is a triumph of work and I compliment Michelle Moran for another well done work!