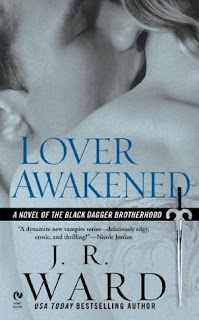 A former blood slave, the vampire Zsadist still bears the scars from a past filled with suffering and humiliation. Renowned for his unquenchable fury and sinister deeds, he is a savage feared by humans and vampires alike. Anger is his only companion, and terror is his only passion—until he rescues a beautiful aristocrat from the evil Lessening Society.


Bella is instantly entranced by the seething power Zsadist possesses. But even as their desire for one another begins to overtake them both, Zsadist’s thirst for vengeance against Bella’s tormentors drives him to the brink of madness. Now, Bella must help her lover overcome the wounds of his tortured past, and find a future with her

I can admit based on the first two books Z was my least favorite of the brotherhood, although occasionally I found myself wondering if he was not just acting so nasty because everyone expected him to especially in book 2 but I just could not connect with him. I think that is however what was intended we were not supposed to like him, until his book.


Lover Awakened is a great book, it is well written and it truly gives you understanding on why Z is the way he is, we get his full story the abuses he took were well beyond the realm of only being a blood slave. I cried for him, and I cried for other things as well but I will not put them in my review because they are spoilers. Z pushes so hard for Bella to prefer the “un-broken” brother his brother Phury, but she refuses. There is angst as always, but in the end the right thing happens at the right time. Z truly comes to be whole to take his place among the Brotherhood and be more than a killer, he truly becomes a warrior.


By the end of this book I had fully changed my my mind on Z, while he won’t replace my favorite just yet of Rhage he is now loved by me. Well done it is not often I go from absolutely not liking a character to making me love them.


I still do not like the lessers I get why they are there but they bore me. John Matthew is going to be great once we get into his full story and bless Butch for his pinning, though I wonder what V did to him, I bet you do now too.