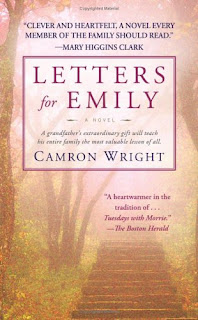 You are so young. You may wonder what an old man like me could teach? I wonder as well. I certainly don’t claim to know all the answers. I’m barely figuring out the questions….Life has a strange way of repeating itself and I want my experience to help you. I want to make a difference. My hope is that you’ll consider my words and remember my heart.


Harry Whitney is dying. And in the process, he’s losing his mind. Afflicted with Alzheimer’s disease, he knows his “good” time is dwindling. Wishing to be remembered as more than an ailing old man, Harry realizes the greatest gift he can pass on is the wisdom of his years, the jumbled mix of experiences and emotions that add up to a life. And so he compiles a book of his poems for his favorite granddaughter, Emily, in the hope that his words might somehow heal the tenuous relationships in a family that is falling apart.


But Harry’s poems contain much more than meets the eye….As Emily and her family discover, intricate messages are hidden in them, clues and riddles that lead to an extraordinary cache of letters, and even a promise of hidden gold. Are they the ramblings of a man losing touch with reality? Or has Harry given them a gift more valuable than any of them could have guessed? As Harry’s secrets are uncovered one by one, his family learns about romance, compassion, and hope — and together they set out to search for something priceless, a shining prize to treasure forever. They may grow closer in spirit or be torn apart by greed…but their lives will be undeniably altered by Harry’s words in his letters for Emily.

The letters are written by a Grandfather with Alzheimers (ostensibly) to his granddaughter. Grandpa Harry wants to leave letters and poems behind so that people can know him for the man he was in life, and not the man he was as his mind and conduct were claimed by disease.

There are additional story lines relating to his relationships with his wife, his children, and between his children and their families, but I was most struck by two things: his desperation to be remembered with fondness, and not as the crazy crank he anticipated becoming; and the fact that his disease process was exacerbated by a lifelong battle with depression.

I was touched by the story, even when I felt that the ending was perhaps a little idealized for a society that exalts the easy divorce.

2 thoughts on “Book Review: Letters for Emily by Camron Wright”