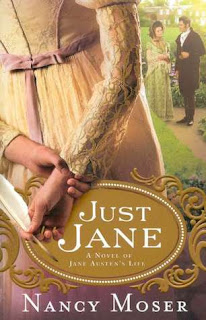 Moser (Mozart’s Sister) frames this novel as a journal written by Jane Austen, following her life from when she falls in love with Tom Lefroy at age 20 until she is an established writer in her late 30s. Those familiar with Austen’s life will recognize many of the circumstances—the loss of the beloved family home at Steventon when her father retired to Bath, the death of her sister Cassandra’s fiancé, her mother’s many illnesses. However, they may not recognize Moser’s Austen, who mopes about pining after guys, resents her parents, worries regularly about whether she is a real writer and reflects on her faith in God (which was important to Austen, but which she was reticent to discuss). Austen’s voice comes through in extensive quotes from her letters—paragraphs and even occasionally pages. Since these are mostly unmarked, readers may not recognize them as Austen’s words, but their vivacity and wit often make them stand out from the rest of the writing. Some aspects of the book are charming, and it is an easy introduction to Austen’s life. However, it fails to be compelling as it devolves into simply tracking events as they occur, and does not capture Austen’s spirit. It will likely disappoint both Austen devotees and historical fiction fans. (Sept.)
Copyright © Reed Business Information, a division of Reed Elsevier Inc. All rights reserved.

Just Jane, what is there to say about this Nancy Moser Novel? Well I shall start by saying I loved it. I have always been a fan of Jane Austen, how can one not? The work speaks to everyone, and well I will say I am with millions of women I love Fitzwilliam Darcy, even before he was on film by Colin Firth. But as much as I love her works I will admit I didn’t know much about Jane Austen as herself. Perhaps that is how she would have wanted it, as according to the portrayal by Moser; she was a woman who preferred to keep to herself. But you can not help but be sucked in when you read Just Jane.

It is a fictional account of Jane’s life, but it stays as true to fact as possible (I have since been researching it’s in my nature) and is written fantastically. We follow Jane through her life, her chances to marry that she declined, and her family’s ups and downs we are there through it all. We see the good Jane and the bad Jane. She was a fantastic Aunt, but a very critical person. She enjoyed going to balls, and yet she couldn’t stand most of the people either, a walking talking contradiction my kind of person!

If you know anything about Jane Austen anything at all, you will love this book. Nancy Moser does a fantastic job of telling the story of the woman who wanted to be alone and yet didn’t. Who gave her life to her work. Her life was her work. And we will see bits of Jane in all of our favorite characters and some of her family too. And of course you will see just when her work was truly appreciated, while she was acclaimed well enough when the works came out it was not until the 1900’s when she truly became appreciate for what we know her as today.

One thought on “Book Review: Just Jane by Nancy Moser”