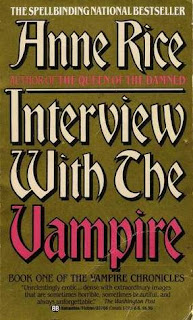 The time is now.

We are in a small room with the vampire, face to face, as he speaks, as he pours out the hypnotic, shocking, moving, and erotically charged confessions of his first two hundred years as one of the living dead. . .


He speaks quietly, plainly, even gently . . . carrying us back to the night when he departed human existence as heir–young, romantic, cultivated–to a great Louisiana plantation, and was inducted by the radiant and sinister Lestat into the other, the “endless,” life . . . learning first to sustain himself on the blood of cocks and rats caught in the raffish streets of New Orleans, then on the blood of human beings . . . to the years when, moving away from his final human ties under the tutelage of the hated yet necessary Lestat, he gradually embraces the habits, hungers, feelings of vampirism: the detachment, the hardened will, the “superior” sensual pleasures.


He carries us back to the crucial moment in a dark New Orleans street when he finds the exquisite lost young child Claudia, wanting not to hurt but to comfort her, struggling against the last residue of human feeling within him . . .


We see how Claudia in turn is made a vampire–all her passion and intelligence trapped forever in the body of a small child–and how they arrive at their passionate and dangerous alliance, their French Quarter life of opulence: delicate Grecian statues, Chinese vases, crystal chandeliers, a butler, a maid, a stone nymph in the hidden garden court . . . night curving into night with their vampire senses heightened to the beauty of the world, thirsting for the beauty of death–a constant stream of vulnerable strangers awaiting them below . . .


We see them joined against the envious, dangerous Lestat, embarking on a perilous search across Europe for others like themselves, desperate to discover the world they belong to, the ways of survival, to know what they are and why, where they came from, what their future can be . . .


We follow them across Austria and Transylvania, encountering their kind in forms beyond their wildest imagining . . . to Paris, where footsteps behind them, in exact rhythm with their own, steer them to the doors of the Théâtre des Vampires–the beautiful, lewd, and febrile mime theatre whose posters of penny-dreadful vampires at once mask and reveal the horror within . . . to their meeting with the eerily magnetic Armand, who brings them, at last, into intimacy with a whole brilliant and decadent society of vampires, an intimacy that becomes sudden terror when they are compelled to confront what they have feared and fled . . .

Interview with the Vampire” is a truly remarkable book and this is by far not the first time I have read it, but the first time I review it. Without claiming to be a fantasy know-it-all, I’d like to say that the characters in this book are probably some of the most well-developed fantasy creatures out there. Each one has their own doubts, fears, hopes, and a whole system of values. They might not always act as expected from them, but then again, do they have to be perfect, all-knowing, wise and so very distant from humans every single time? What Anne Rice has created is not only a work of fiction, but also a study of psychology.

I have never read a book which goes so deeply into vampire nature, telling us a whole new story of insecurity, where dark thoughts battle with the constant fascination by the world; where the need to be together with somebody of your own kind overcomes all obstacles, even your own hatred; where the struggle for knowledge fights for its existence with the fear that there might be nothing to know; where cold comfort meets change. And all this is so stylish, so dark and dangerous, that nobody dares to think these vampires are funny or stupid.

Isn’t it paradoxical that the book’s approach to fantastic creatures is so logical, yet so rarely used in modern-day fantasy literature? After all, some of them have been humans before their transformation, right? Why does no one pay attention to their struggle after becoming vampires for example? Where does the presumption that they suddenly become encyclopedias come from?! I’m not saying the human psychological approach towards them doesn’t exist, such a thing I cannot claim, but it still is an uncommon concept. Perhaps it’s harder to think before writing, to analyze the options and get to know your own characters, to predict their every move. All too often, modern-day authors just find in fantasy an easy way to escape all logic and write whatever comes out from under their fingers. That is why, I fear, literature teachers will always retain their negative attitude towards fantasy. Which is a shame.

2 thoughts on “Book Review: Interview with the Vampire by Anne Rice”