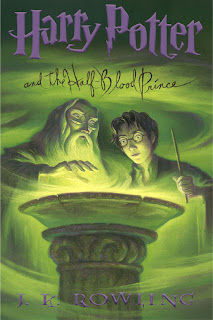 The war against Voldemort is not going well; even the Muggles have been affected. Dumbledore is absent from Hogwarts for long stretches of time, and the Order of the Phoenix has already suffered losses. And yet . . . As with all wars, life goes on. Sixth-year students learn to Apparate. Teenagers flirt and fight and fall in love. Harry receives some extraordinary help in Potions from the mysterious Half-Blood Prince. And with Dumbledore’s guidance, he seeks out the full, complex story of the boy who became Lord Voldemort — and thus finds what may be his only vulnerability.

Another chapter in the story and life of Harry Potter. And the books and the story keep getting darker and more adult. I am not sure I would let a child continue to read the story at this point, but that it my point of view. Harry and his friends adult and children are once again back and Hogwarts, and once again fighting the evils of Lord Voldermort.

But this time the Dark Lord seems to have gotten himself a new recruit, at least Harry is convinced so while no one else seems to share his suspicions against Draco Malfoy. We see more torture, dark arts and death in The Half Blood Prince leading us down a dark maze of things in the wizarding world. A war is here, and the book does not hold back those facts.

Despite my reserves at this being a book I would actually call young adult I did enjoy it. The story kept my attention, and while some of the plot was blatantly obvious from the get go it still made me curious as to what exactly was going to happen. There defiantly points in the book where I thought she had run out of story, but it did recover well enough for me to continue and be entertained by what was going on. Over all not a bad Chapter in the series.

2 thoughts on “Book Review: Harry Potter and the Half Blood Prince by J.K Rowling”