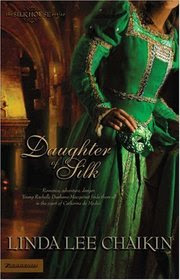 Pursuing the family name as the finest silk producer in Lyon, the young Huguenot Rachelle Dushane-Macquinet is thrilled to accompany her famous couturier Grandmere to Paris, there to create a silk trousseau for the Royal Princess Marguerite Valois.

The Court is magnificent; its regent, Catherine de Medici, deceptively charming … and the circumstances, darker than Rachelle could possibly imagine. At a time in history when the tortures of the Bastille and the fiery stake are an almost casual consequence in France, a scourge of recrimination is moving fast and furious against the Huguenots—and as the Queen Mother’s political intrigues weave a web of deception around her, Rachelle finds herself in imminent danger.

Hope rests in warning the handsome Marquis Fabien de Vendome of the wicked plot against his kin. But to do so, Rachelle must follow a perilous course.

Daughter of Silk is not a book I was pulled into right away, in fact I struggled with it at first, but the more I read the more I got into the book. The biggest issue I had with it personally was the amount of French integrated into it. I am one who feels if you’re writing a book in English have it be in English if you’re writing it in French have it be in French. Aside from that the book while slow to start is very good.

It is a Christian Fiction and not for everyone, but if you know the history of what happened in France while the Queen Regent “Madame le Serpente” ruled you know why it would be. This is a time of great religious persecution and peril. Protestants being slaughtered by the thousands just because of their beliefs because they were not catholic. This book brings that to light and entwines characters of evil and good, and those who are finding love in different places. Over all it is a good book that shows the ways of a dangerous court in a dangerous time very well.