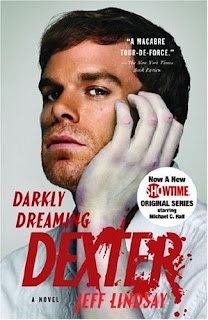 Meet Dexter, a polite wolf in sheep’s clothing… a monster who cringes at the site of blood… a serial killer whose one golden rule makes him immensely likable: he only kills bad people.

Dexter Morgan isn’t exactly the kind of man you’d bring home to Mom. Though he’s playful and has a wonderfully ironic sense of humor, Dexter’s one character flaw (his proclivity for murder) can be off-putting. But at heart Dexter is the perfect gentleman, supportive of his sister, Deb, a Miami cop, and interested only in doing away with people who really deserve his special visit. Dex is quite good-looking but totally indifferent to (and, frankly, a bit puzzled by) the attentions paid to him by women. Despite the fact that he can’t stand the sight of blood, he works as a blood-spatter analyst for the Miami police department, a job that allows him to keep tabs on the latest crimes and keep an eye open for his next quarry.

Dexter’s well-organized life is suddenly disrupted when a second, much more visible serial killer appears in Miami. Dex is intrigued, even delighted, by the fact that the other killer appears to have a style reminiscent of his own. Yet he can’t help but feel that the mysterious new arrival is not merely invading his turf, but reaching out to him as well. This new killer seems to be doing more than copying Dexter�he seems to be saying, “Come out and play.” Dexter’s secret life makes for a lonely existence… even a lovable monster can be intrigued by the prospect of finding a friend.

I love the Showtime series Dexter, for once I had no idea it was based on books as soon as I found out I knew I had to read the books. A series that is that good on TV simply must be that good in books. Therefore, I picked up my first Dexter book, Darkly Dreaming Dexter. I admit I am not fully involved in this genre but again love the show must see the books. Moreover, I will never regret that choice.

We follow the wolf that is Dexter as he makes his way through the motions of being a normal person. However, Dexter is anything but normal, he is just pretending although he has gotten very good at pretending. The only thing he does seem to have issues with is connecting. But come the night and come the dark passenger. The imaginary in this book is fantastic and you can see how the show came to be as it is. Since I have seen the show, first I must admit I could hear Michael C. Hall’s voice as Dexter has his inner dialog.

The thing about Dexter is you cannot help but love him. He truly is a good man he cares about issues; he loves his sister and is very protective of her and children oh how Dexter loves children. However, even with all of this, you cannot hide from his Dark Passenger; Dexter Morgan is a serial killer. The catch? He only kills people who are without a doubt guilty of horrendous crimes, and through some loophole in the justice system have gotten off. Really how can a guy like that truly be a monster? My husband (shocking we agree on this series as a joy) says that Dexter is like Batman only he kills where Batman does not. A very true comment Dexter Morgan is a vigilante. If you like the show or are even just curious about it I recommend this book the first in the series as an opener, it will suck you into the world that is Dexter.