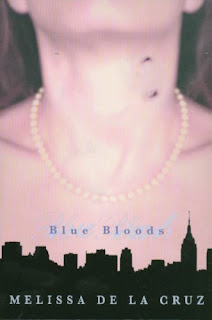 Schuyler Van Alen is a freshman at the prestigious Duchesne School. A loner by nature, she finds her life thrown into turmoil when she turns 15. Suddenly she is allergic to the sun, craves raw food, and if she cuts herself, her blood is blue. Schuyler has no idea what is happening to her. As more and more curious things happen, Schuyler must confront her family and friends to discover the truth behind her blue blood. But there are bigger problems soon to be faced. When a girl in school is found dead, with mysterious bite marks on her neck, Schuyler is more confused than ever about her heritage…and her destiny.

Blue Bloods is yet another interesting take on the myth of the Vampire. In Blue Bloods Vampires are fallen Angels they have been expelled from paradise and now go through cycles. This is certainly a curious look at the myth of vampires, but in the book it is given as a well explained one. Like in Marked the Vampire side of them starts to show in the high school ages. They than become Blue Bloods, humans are called Red Bloods.

While you can tell that Blue Bloods is obviously the set up book for the next book in the series it was still an enjoyable read. It has a likeable group of characters, and of course like others it has its dislikeable ones as well. One thing that makes me giggle a bit is that it seems the “bad guy” or bully is always blonde. In Blue Bloods it’s the popular girl Mimi Force. Ah but Mimi has a twin brother named Jack, who Schuyler ends up getting a crush on. To bad for them it doesn’t seem to be meant to be. Or so it seems. Never know what will happen later in the series.

You follow Blue Bloods along the line that it’s setting up, giving you information about the history of the Blue Bloods. Some of the better bits are when they comment about their exploits in Rome, and Egypt. It would seem as long as they have been on earth they are the people of influence and power. They have money, and are pretty much the elite. It was a fast read, and a good read but it is obvious that it’s a set up book.

When the book comes to its conclusion it’s not a conclusion at all. It is obvious you wont find out about the bad guys of the book (now I can’t tell you who that is it would give away a plot twist) are fully up to. You also won’t learn how to bring them down, unless of course you read on. Which I plan to. If you’re a series reader, like different takes on Vampires and don’t mind a smattering of religion and history Blue Bloods is for you.