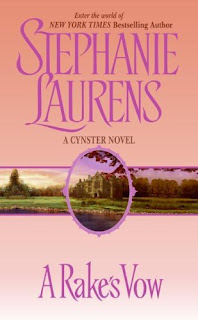 Vane Cynster always knew which way the wind was blowing, and it was headed in a marrying direction. The other Cynster men might not mind stepping up to the altar, but Vane never wanted to be leg-shackled to any woman – no matter how comely. Bellamy Hall seemed like the perfect place to temporarily hide from London’s husband-hunters. But when he encountered irresistable Patience Debbington, Vane realized he’d met his match and soon he had more than seduction on his mind.

She vowed no man would catch her.

Patience wasn’t about to succumb to Vane’s sensous propositions. Yes, his kisses left her dizzy; his caresses made her melt; but he was arrogant, presumptuous…and, despite his protests, bound to be unfaithful – just like every other man. Patience had promised herself she’d never become vulnerable to a broken heart. But was this one vow that was meant to be broken?

You have to love the Cynster’s on a purely girly level you have to. A group of strong virile males who love family and protect it at all cost? Not to mention just how handsome the whole lot of them are. But ah this all seems to play against one Vane Cynster (as in weather vane thank you very much) because right of the bat Patience labels him an “elegant gentleman” which of course he is. But in her terms this means a man who doesn’t love and feels fit to sleep with anything he wants while keeping a wife and nursery at home. Ah but Miss Patience doesn’t know the Cynster’s very well now does she.

The second book in the thrilling series by Stephanie Laurens A Rakes Vow kept my attention throughout. While it was not quite as exciting as the first book Devil’s Bride, but not to worry it is wonderful. You get to follow Vane as he is leaving the dedication ceremony for the church he and his Cousins had to help re-roof thanks to Honoria. And true to his name while Vane has no plan at all to be leg shackled and seeks to get out of the storm at his Godmothers house, but fate has another idea in mind. And from the moment he seems Miss Patience Debbington, he knows fate had another idea in mind.

We follow Vane as he isn’t sure what to do about fates plan, and than his inevitable acceptance. And Patience having some issues of her own with the whole idea. All the while we have aback cast of characters, and someone who is stealing things. Now the plot with the thief and the scepter at times drama drags. But in the end it is curious and you do follow some sweeps and turns. Although I knew one person involved in it from the moment they mentioned a certain clue, (no I am not going to give it away.). Truly though bar a few small blips is fantastic. Huzzah to Stephanie Laurens and Huzzah to the Cynster men bring on the next one!

One thought on “Book Review: A Rakes Vow by Stephanie Laurens”